[Editor’s note: I purposely used the French spelling above.]

I may have started out posting reviews of this series on the Skeptical Analysis blog, but I figure it really belongs here.

When The West Wing came out in 1999 I wasn’t much in for watching TV drama series, and I let the first season slide by. I picked up the show when it went onto syndication and eventually obtained all seven seasons on DVD. Screen shots are from the DVD, and details are from Wikipedia. I call this the Ainsley Hayes story. It spans episodes 4 and 5 of the second season.

It turns out this is not the first time I saw the very smashing Emily Procter on TV, but that was my own fault. Following her appearances in The West Wing she moved to the crime show CSI: Crime Scene Investigation, and I wound up watching that before I got around to watching this show.

The conversation is what makes this one go, and I attribute it to writer Aaron Sorkin, acknowledged as the creator of the series. The dialog is much like this. Sam explains the President’s version of the bill purchases things that schools need, such as textbooks. He elaborates that 40% of teachers in Kirkwood, Oregon, report not having sufficient textbooks.

Sweet Ainsley comes back at him, pointing out the Republican version of the bill just gives money to school districts to spend as they see fit, they being in a better position to determine how to spend the money than a bunch of politicians in Washington. Further, she points out, to Sam’s chagrin, that Kirkwood is in California, not in Oregon.

Sam’s White House co-workers are watching the show at work, and the word gets around, resulting in a watch party, with popcorn. They are going to enjoy seeing Sam get “his ass kicked by a girl.”

Odd about the character of Sam Seaborn in this series is he is from time to time portrayed as a buffoon far below expectations. For example, in the pilot episode this brilliant lawyer working as Deputy White House Communications Director is absolutely without a clue regarding the history of the White House. Now he goes on live TV and confuses the states of California and Oregon.

At another level it’s also subtle. Ainsley’s assertion that spending of federal money should be left to local communities is exactly the problem that Sam should have jumped on. There is a reason there is federal money, and that reason is that local politicians don’t have the temerity to go to their constituents for adequate tax money to support the schools. Also local communities often see fit to spend tax money on sports stadiums at the same time that teachers are having to purchase classroom supplies out of their own pockets. 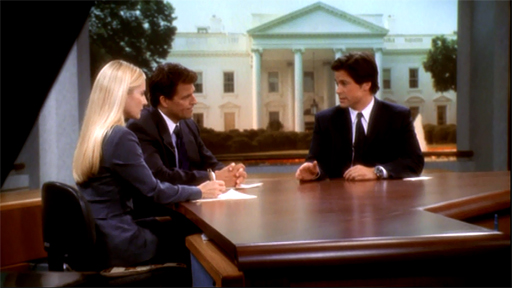 A parallel theme that runs through this and the following episode is a conference with the president of Equatorial Kundu, a fictional African country. That eventually ties into Ainsley Hayes connection.

The evening following the TV news panel, Ainsley is in her new apartment in Washington, discussing the encounter with her Republican friends and working through the details of her new phone. She’s trying to figure out the caller ID feature. A call comes in. It’s from the White House.

Aaron Sorkin almost repeats himself with this device, having used a similar one in the script for The American President. In that scene the president, played by  Michael Douglas, has become interested in a female of the opposite sex, played by  Annette Bening. He phones her up, and she takes the call for a practical joke.

Not knowing what it’s all about, Ainsley responds to the summons and appears before Leo McGarry, taking some humorous time to figure out he’s offering her a job. She has no intention of working for a Democratic administration, but she agrees to think it over and departs.

The next day Ainsley returns to give Leo the bad news, and she encounters Sam and Deputy Chief of Staff Josh Lyman (Bradley Whitford). There ensues a mini debate. Sam reminds Ainsley that the Republican bill grants money directly to school districts on the condition they agree not to distribute condoms. For some reason distributing condoms to high school students is anathema to Republicans and conservatives in general. A move that would result if fewer teenage (read high school students) pregnancies is rejected because it allows kids to have all the fun of sex without bearing God’s punishment (pregnancy) for having sex (the original sin).

Ainsley unloads on liberals’ anti-gun stance, and Sam reminds her that Josh is a (barely) living example of gun violence in this country. “They bought guns, they loaded ’em, they drove from Wheeling to Roslyn, and until they pulled the trigger they yet to commit a crime.”

Then drama. The situation changes. Josh and Sam get a note regarding breaking developments. The African president gets called into the Oval Office for some tragic news. A military coup has usurped his government. His brother and his sons have been killed. His wife is in hiding in Kenya. He faces certain death if he returns. He knows that as a legitimate leader he must return.

Ainsley accidentally witnesses this conversation and comes to understand what business in the White House is all about. It’s not about rhetoric and power plays. It’s about real world problems being worked by serious and dedicated people.

That evening over dinner with her Republican friends she defends the workers at the White House. They are not fools and leaches. And she is now their lawyer.

The Ainsley Hayes saga continues into episode 5 of the season. She now works for White House Counsel Lionel Tribbey (John Larroquette), an explosive personality and intensely liberal. He gives her an assignment. She needs to go to Congress and straighten out a mess created when two White House staffers, Steve Joyce and Mark Brookline testified before a committee that the White House was not in possession of “the Rockland Memo.” The White House does have the memo in question and the matter of contempt of Congress is discussed.

Tribbey then pauses to ask why a conservative pundit like Ainsley is working for the White House, and there ensues a plunge into the topic of Gilbert and Sullivan. Trust me. This has bearing on matters later on. She says she’s working for the White House “out of a sense of duty.” Tribbey is taken aback. He exclaims, “What, did you just walk out of The Pirates of Penzance?” Then he goes on to sing a bar, “For, he’s an Englishman.” She reminds him that’s not from Penzance, but from H.M.S. Pinafore. There is a dispute. It’s carried on with others, including Sam, who agree’s it’s from Pinafore.

Ainsley returns from The Hill and gets Joyce and Brookline aside to admonish them to not make any more trouble by giving false testimony to Congress. The two do not take admonishment lightly, and they especially resent it coming from a leggy Republican lawyer. The conversation does not go well.

Later, Sam confronts Ainsley about going to The Hill, which should have been his job, and she asks him not to insult her any more than she has already been insulted this day. He’s in a conversation with Josh, when he realizes he spoke badly, and he follows her to her office, where the two discover an additional gift of hatred left on her desk.

It takes but an instant to figure out who left this and Sam storms into the office where Joyce and Brookline are working and fires them. They are ordered (including by Lionel Tribbey) to leave immediately.

It’s the next morning, Saturday, and Ainsley comes into work (people at the White House work weekends). As she approaches her office and turns on the lights, music from Gilbert and Sullivan begins playing. In her office she finds staff members Josh, C.J., and Sam. They have decorated her office with Gilbert and Sullivan posters, and there is a nice bouquet of flowers on her desk. All are drinking toasts to her. It’s a nice welcome to her new job at the White House.

There is an important moral to this tale. What counts is not religious or philosophical differences. The team comes first. It’s the same in politics, in the military and in industry. Things get done with people working together for a common purpose. And all the rest is bullshit.

I'm a retired engineer living in San Antonio, Texas. I have served in the Navy, raced motorcycles, taken scads of photos and am usually a nice guy. I have political and religious opinions, and these opinions tend to be driven by an excess of observed stupidity. Gross stupidity is the supposed target of many of my posts.
View all posts by John Blanton →
This entry was posted in Television and tagged Entertainment, The West Wing. Bookmark the permalink.