The Last Train to Dijon

The plan was to stay seven nights in Tours followed by six nights in Dijon. Should have been no problem. We booked vacation rentals on-line before leaving the U.S. A few days into our stay in Tours I figured to map out our trip to Dijon by train. Some kind of problem.

I have an Android tablet app that works up train schedules, and it showed multiple trips from Tours to Dijon on the appointed day. Problem was, most were multiple stops and did not get us to Dijon in time to make our two p.m. meeting with the apartment owner. Some that did also took us back to Paris, to the Montparnasse station, from which we would need a hike across town to the Lyon station, lugging our possessions. But there was one, only one, that went direct, no changes of trains, and with a minor problem. This train leaves at 6:57 in the morning and makes 19 stops, arriving in Dijon at 11:54. That’s nearly five hours on the train. We prepared ourselves.

And we were off. A bunch of other people were making the trip, at least part of it. the train started to fill up just before departure time.

But we were settled in with our carry-on bags stashed nearby. Barbara got out her knitting and prepared to spend the morning on a train.

Getting on a train typically, not always, involves walking down the platform and getting on board. You need to have your tickets, of course, and they sometimes check to make sure you have one. That is, the right ticket for your trip. You also need to cancel your ticket before you get on the train. That keeps people from reusing a ticket. There are machines in the station or on the platform that do this canceling. We had already made multiple trips this outing, and nobody had ever checked tickets. Until now.

When the train stopped at Chenonceau in total darkness, about 25 minutes out I noticed two men in SNCF livery get aboard. I got our tickets ready. Sure enough. Shortly after the train pulled out of the Chenonceau stop they were coming through our car. 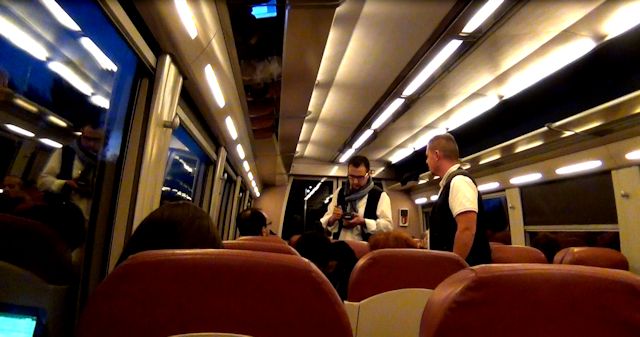 One of them looked at my two tickets and punched a hole through them both. I guess that means something to the railroad.

Eight o’clock drew near, and the sky began to brighten. Presently we could sit and watch the French countryside roll by.

And the train did make 19 stops, finishing with Beaune, about 25 minutes out of Dijon.

I sat the entire trip. With some foresight I had stopped at a shop in the Tours station and had purchased a half-liter bottle of Diet Coke. That’s 3.80€. Yeah, you need to plan ahead and buy your stuff at the local grocery market. Barbara brought along four croissants, and we kept refreshed along the way.

And we were finally at the Dijon station and joining a horde of other travelers, trundling a couple of hundred yards to the station, probably none but us having made the five-hour trip. 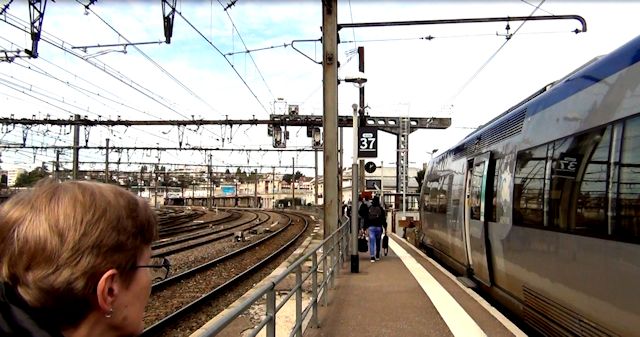 We stopped inside the station while Barbara pulled out her phone to plot a route to the apartment, and also some lunch. We had two hours to kill before checking in. But that’s another story.

The images are from a video I shot on the trip. I will post it to my YouTube channel when I get back to my computer room in San Antonio. Keep watching.

I'm a retired engineer living in San Antonio, Texas. I have served in the Navy, raced motorcycles, taken scads of photos and am usually a nice guy. I have political and religious opinions, and these opinions tend to be driven by an excess of observed stupidity. Gross stupidity is the supposed target of many of my posts.
View all posts by John Blanton →
This entry was posted in Photos, Travel and tagged Dijon, Europe, France, SNCF, Tours, travel, vacation, YouTube. Bookmark the permalink.

1 Response to The Last Train to Dijon