As mentioned elsewhere. we were having dinner, we both agreed we needed to get out of the house. Barbara Jean is master of this sort of thing, and a couple of hours later she had us booked at Captain Morgan’s Retreat in Belize—also American Airlines round trip—two weeks from the day. And finally we were here.

The resort is on Ambergris Kaye, an island up the coast from Belize City. We took the water taxi to get there, about an hour and a half ride. It was worth the trip.

Although nobody around wants to mention the word timeshare, most of the units seem to be marketed that way. The soul mate obtained the listing through Timeshare User’s Group (TUG) and found an owner wanting to rent out his week. We got it for a bargain. The owner had the entire upstairs of one unit, consisting of two units with a connecting door. One unit has a kitchen, a large living area, and a sumptuous bedroom and bath. The other side is more like a hotel room with a microwave oven. Still, the bed is king-size and most relaxing.

Wi-Fi is outstanding. We obtained pass codes for four devices. Download speed is 5 MBPS, and it is rock solid, except that something cut power to the resort for a few seconds, and we lost the link during the interval. 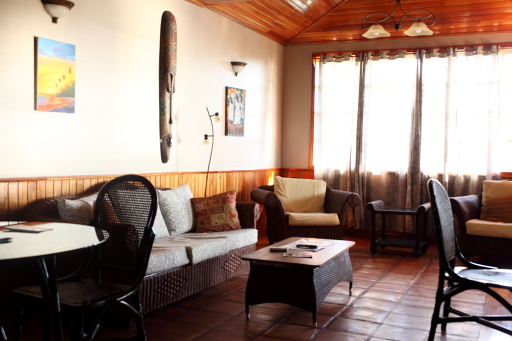 The grounds and all facilities are well-maintained—we observed workers constantly busy making sure the sand was kept clean and brushed flat. It’s 17 degrees from the equator, and the temperature is pleasingly mild. The big side has two air conditioning units, and the other has one. They turned out to be seldom needed.

All manner of activities are available. There is a reef visible off in the distance, and some were out there for snorkeling. Expeditions by boat are offered. There is a water taxi that can take you into San Pedro, the main town on the island. We didn’t do any of that. Our aim was to kick back and do nothing for a week. We did avail ourselves of the pool—there are three, and they are sparkling and well-kept. 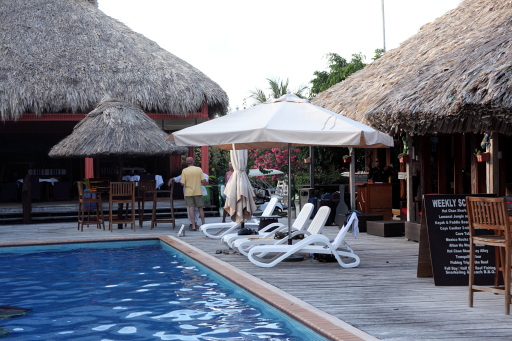 A walk on the pier was rewarded by the opportunity to see how fish are prepared. One of the items on the restaurant menu is the whole fish, which is available in three sizes and three prices. This guy seemed to be cutting up some small groupers. 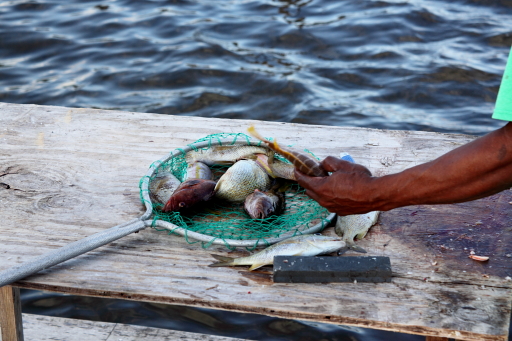 The restaurant food is most satisfactory. A favorite of mine is what amounts to a chicken salad. We had that a couple of times. We had the nacho plate, as well. But, warning, you want to share one of these. It is a large plate of food. 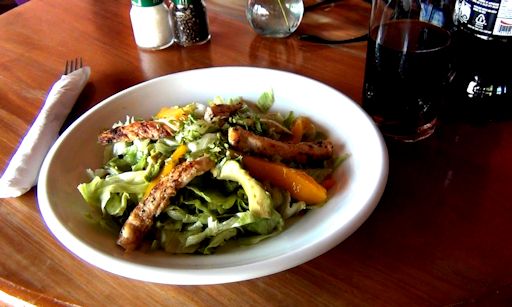 Accessibility is my main complaint. We would possibly go back another time, but nobody is looking forward to the hassle of getting there and back.

I'm a retired engineer living in San Antonio, Texas. I have served in the Navy, raced motorcycles, taken scads of photos and am usually a nice guy. I have political and religious opinions, and these opinions tend to be driven by an excess of observed stupidity. Gross stupidity is the supposed target of many of my posts.
View all posts by John Blanton →
This entry was posted in Photos, Travel and tagged Ambergris Kaye, Belize, Captain Morgan's Retreat, photos, resort, travel, vacation. Bookmark the permalink.