Number 6 of a series

I’m not going to provide a synopsis of the plot. This has become a cult classic, and everybody knows what’s going on. It’s Borat from 2006. The full title is Borat! Cultural Learnings of America for Make Benefit Glorious Nation of Kazakhstan, and I caught these screen shots from Hulu to give the uninitiated an idea of the visuals. Details are from Wikipedia. Here is the cast:

So Borat is going to America to promote cultural exchange. The opening shot is a dummy film clip complete with scratches and lint to get you up to speed on the coming cultural clash. 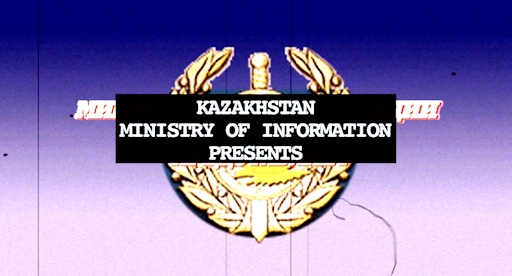 We get a view of Borat’s upscale Kazakhstan village. I must say, I have encountered scenes like this in rural Texas and Utah.

Borat introduces himself, parading the main street with some villagers. They appear to be a contented bunch. Borat is preparing to go to America to produce a documentary.

Beginning a continual sequence of sight gags, we see Barat, on his stroll, overtake a man driving a wagon. Finally we see the wagon is being pulled by a woman, not a horse.

Kindergarten in Kazakhstan. Like in Texas, every kid has a Kalashnikov rifle. 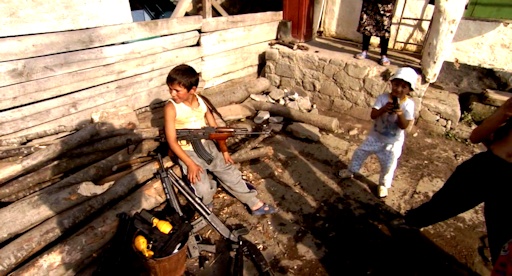 Borat’s beautiful home. He is proud.

He introduces his prostitute sister. 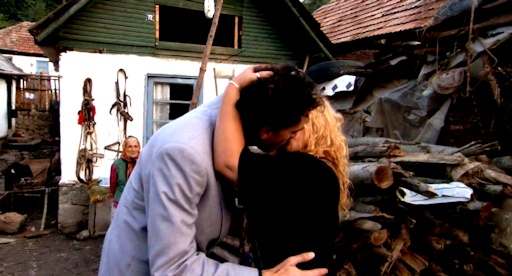 And his mother, the oldest woman in the village. 42.

He introduces viewers to village cultural events, including The Running of the Jew. It’s like The Running of the Bulls, except the crowd is being chased by a caricature of a Jew, as might have been depicted in a Joseph Goebbels propaganda cartoon. The figure has a large paper mache head, and he is followed by his wife, also a Goebbels caricature, who stops to lay a giant Jew egg. The children of the village attack the Jew egg to destroy it. This film is going to bend (break?) all civil conventions.

We meet his wife, Oksana. Trust me, I have met a woman named Oksana. The dialog is either in Kazakh or Russian, I can’t tell. Oksana gives Borat dire warnings before leaves for America. If he messes around over there she’s going to break his cock off.

Borat arrives in New York with his producer, Azamat. The city’s subway system overwhelms them. We see them making battle with the down escalator. 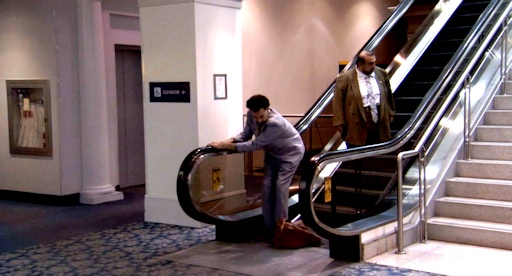 On the train Borat goes around introducing himself to passengers and is roundly rebuffed. Unlike Kazakhs, Americans like lots of space. His pet chicken gets loose. 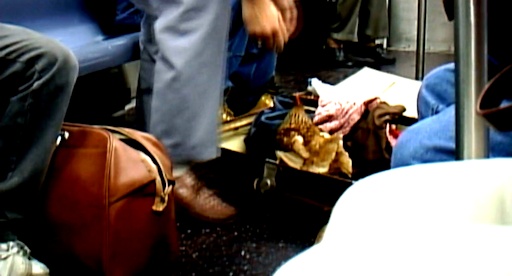 More sight gags than I can catalog. At the hotel he mistakes the elevator car for his room. The bell hop has to tell him they are going to his room several floors up. Natural, indoor plumbing and more amaze Borat.

There are multiple events arranged for the documentary. Here he discusses with a group of feminists. Sexual equality is unknown in Kazakhstan. There is shock on both sides.

He discovers he must travel to California to meet Pamela Anderson after seeing her in the almost all-together on Bay Watch. Many adventures along the way. Here he comes upon a woman holding a yard sale, and he mistakes her for a Gypsy selling stolen merchandise. 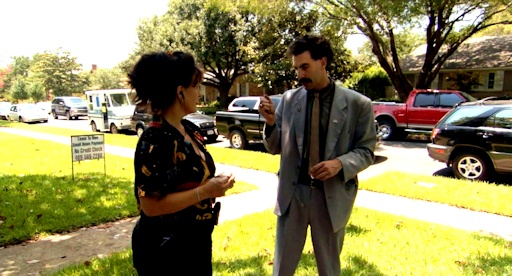 Borat flies into a rage, and we are treated to the view of two naked man wrestling and getting into obnoxious positions.

They break up, and Borat finally catches up with Pamela Anderson at a book signing. He makes his advances and is strongly rebuffed. Security guards throw him out onto the street.

Broke and alone in America, Borat wanders hopelessly, enduring misadventures, until Azamat finds him and takes him back to Kazakhstan.

This is the height of ridiculous, so there is not much I can do to point out absurdities. Only note this. Kazakhstan is more like Texas than is portrayed in this movie. The scene on the subway escalator leaves to believe Borat and Azamat have never encountered modern civilization. By the time they reached their plane at the airport in Kazakhstan they would have already run through this gauntlet.

Also, what we are seeing is supposed to be the documentary. When Borat is wandering alone in America, who is shooting the scenes?

This movie is about 60 minutes of sight gags and cringe-worthy situations. Shortness is one of its endearing features.

I'm a retired engineer living in San Antonio, Texas. I have served in the Navy, raced motorcycles, taken scads of photos and am usually a nice guy. I have political and religious opinions, and these opinions tend to be driven by an excess of observed stupidity. Gross stupidity is the supposed target of many of my posts.
View all posts by John Blanton →
This entry was posted in Entertainment, Movies, Reviews and tagged Entertainment, Kazakhstan, Movies, reviews. Bookmark the permalink.