Number 26 of a series

This one passed me by when it came out 30 years ago. Now it’s streaming on Amazon Prime Video. It’s The Package, featuring Gene Hackman in a classic role. Details are from Wikipedia, which lists the following:

Here is a short synopsis and a critique of this most unbelievable plot.

We are back to the days of the Soviet Union, unraveling at the time this came out. In Berlin leaders are meeting to discuss getting rid of nuclear arsenals. We see there are some in the background not pleased with these developments. At least one, American Army Colonel Whitacre, is dead certain the continuance of mutually assured destruction (MAD) is preventing future wars. We know the generalities, but not the particulars, because TV news anchor Ike Pappas (portraying himself) tells us this speaking into the camera while covering the event.

Doing security is Sergeant Gallagher, a battle-wise career soldier. He and his squad intercept two backpackers in the woods near the meeting. They call the pair up short and Gallagher demands to see the contents of their backpacks. But a squad of German police rolls up and takes charge. They take the hikers away without inspecting their backpacks.

The conference concludes, dignitaries motor away while Whitacre has a private meeting that includes Soviet Colonel Davidov and the Soviet press secretary. A scheme is discussed. 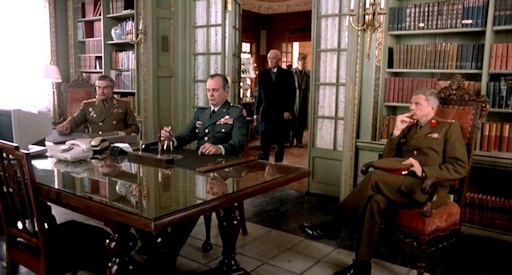 As Gallagher and his men patrol the snowy woods the backpackers are seen roaming freely along the road from the compound. As a particular car carrying people of interest pass them by, the man triggers a bomb in the back of the car.

The car crashes, and the two attackers pull out machine guns and proceed to murder the survivors. Gallagher and his men come on the scene and engage the attackers, wounding the man and suffering one soldier killed. Another car speeds down the road and picks up the two attackers, carrying them away.

Colonel Whitacre takes Gallagher to task over the disastrous outcome. Whitacre questions Gallagher’s competence. The two definitely do not hit it off. 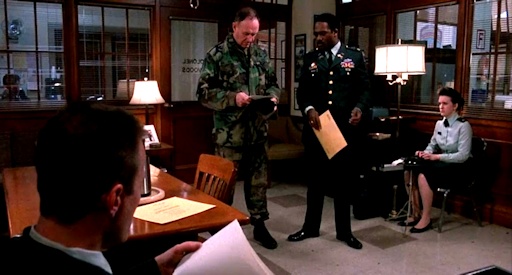 We see Whitacre visiting American soldier Walter Henke at his confinement in the military stockade. He gives Henke the opportunity to redeem himself by going back to the United States and infiltrating a Nazi group in Chicago. Somebody is cooking something up.

Gallagher, on the other hand, is given a different assignment. His assignment is to return immediately to the United States and is to take another soldier with him, supposedly to stand trial. The soldier, Gallagher is told, is Walter Henke. Henke is accused of assaulting people and of being a bad guy in general. He makes this clear at the point on a snowy street where Gallagher takes charge of “the package.” Hence the title of the movie. The soldier is in reality a person named Thomas Boyette, and he is in no way a member of the American armed forces. But to demonstrate he is such a bad guy, he starts a fight with the soldiers turning him over. Something very strange is going on.

Back at the airport in Washington, D.C. “Henke” phones his wife in Alexandria, Virginia, and then asks to go to the restroom, where there are a number of military types. These persons assault Gallagher, knocking him cold and allowing the package to escape. The envelope containing the details of the prisoner transfer is left behind. 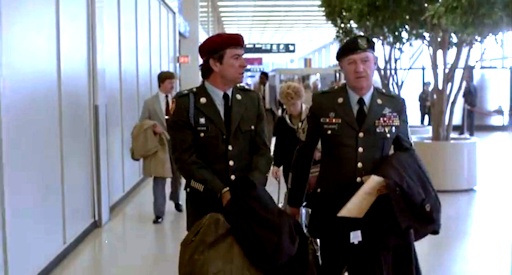 So Gallagher visits the home in Alexandria, Virginia, of soldier Henke. Henke’s wife knows nothing about her husband, especially that he was in military jail, and definitely not that he is back in the United States. And, no, her husband did not phone her from the airport.

Things are finally looking suspicious to Gallagher, and he pays a visit to his ex-wife, Army Lieutenant Colonel Eileen Gallagher. She agrees to help.

She enlists the aid of Army Lieutenant Ruth Butler. Butler does some searching and comes up with alarming details.

Before she can relay these details to Mrs. Gallagher she is murdered—a supposed hit and run pedestrian accident. Mrs. Henke returns home from grocery shopping, and there is an intruder in her house. He approaches from behind and strangles her.

About this point the plotters’ scheme begins to come unraveled. Lt. Col. Gallagher needs to be eliminated. In a parking garage two men, posing as D.C. police approach. They tell her she needs to come with them to sign some papers. She has previously armed herself with her service pistol, and she resists. A running gunfight ensues.

Meanwhile, Sgt. Gallagher has enlisted the help of an Army friend, they they arrive in the friend’s pickup truck. The sergeant scoops up his ex-wife, and the driver plows into one of the gunmen, killing him. Dead bodies are starting to pile up on both sides. 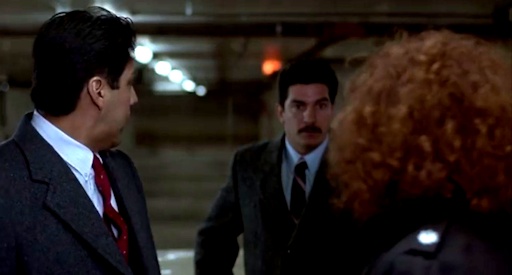 The Gallaghers steal registration plates off a rental car and put them on hers. They drive to Chicago, where the plot is moving.

By now it is revealed “the package” is actually master assassin Thomas Boyette. His assignment is to murder the President of the United States, who will be attending a ceremony at the University of Chicago, where Enrico Fermi’s team first achieved a controlled nuclear fission chain reaction.

The real Henke is seen being welcomed into the Nazi organization. His handlers set him up with an office that poses as a travel agency. It overlooks the spot where the President will be exiting the University of Chicago event.

Sgt. Gallagher hooks with an old friend of his, Chicago Police Lieutenant Milan Delich, who agrees this business is very suspicious and signs on to investigate off the books.

Sgt. Gallagher drops by the headquarters of the Nazi group and pretends to be running an errand. The Nazis are suspicious, but they give Gallagher a packet of pamphlets to carry to Henke. By this way Gallagher learns the location of the phony travel agency.

But one of the conspirators, Karl Richards, is there, and he follows Gallagher outside. Richards follows up and determines Gallagher and others are onto the scheme. They need to be eliminated. Boyette declines the invitation to handle the matter. He is only being paid to kill the President. He directs the amateur conspirators to handle the job themselves. They need to lure their targets out of their safe zone and kill them. Richards poses as a police intelligence officer and tells Delich that a certain confidential informant has information. 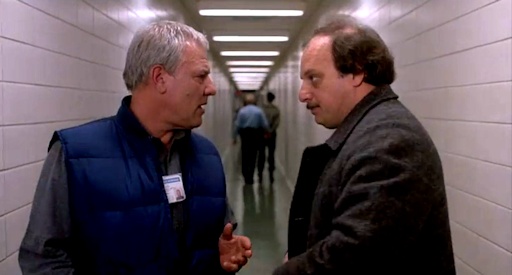 Out on the street one or more of the conspirators come to a bad end, and Delich is taken away in an ambulance.

Gallagher is waylaid and taken to a hideout basement, where they chain him to a post. Boyette comes by to bring him some food and to taunt him. Then he leaves. A phony Army M.P. arrives to snuff the unfortunate Gallagher, but Gallagher gets the upper hand, cold cocking the killer and taking the keys to his chains.

Delich is now out of the hospital and back in service. Gallagher examines photos from the hideout and determines the sniper’s vantage point is the real estate office. He alerts the ex-wife and Delich and then tears off doing what Gene Hackman is most famous for. Driving an Army sedan he careens through traffic to save the world. Here it comes. You guessed it. He crashes through a barricade and jumps the car over the gap of an opening drawbridge. 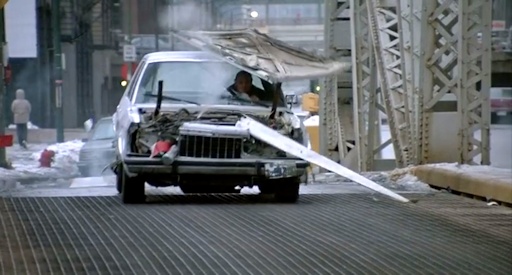 Meanwhile, the real Henke arrives at the real estate office. Richards is there to present him with a present. It is a snazzy case, and inside is a super sniper’s rifle. As Henke picks up the beautiful weapon Richards leaves, and Boyette appears. He shoots Henke in the head and goes about his business preparing to kill the President.

But Delich and Gallagher are searching the building. Gallagher discovers the dead Henke and the sniper’s rifle. Boyette has his own rifle. He looks around and determines the location of the snipers’ roost.

Meanwhile Delich encounters Richards in the building and recognizes him. Richards goes for his gun and is quickly dead.

As Boyette is applying pressure to initiate the fatal shot, Gallagher arrives. Surprised, Boyette cannot respond in time, and two quick shots end the career of a professional killer.

Nobody on the ground is aware of the attempt, but it quickly gets revealed. Gallagher and Whitacre have a tense encounter, each promising fearful retribution. We next see Gallagher testifying to what he knows. Whitacre’s whereabouts are unknown.

But the closing scene shows the fate of Whitacre and the Soviet colonel. Their driver stops to examine the map and then turns a pistol on both of them. The conspiracy is now shut down with no loose ends.

And it is all very much ridiculous. The conspirators want to disrupt approval of the treaty. That involves first killing a car full of people along a snowy road and then killing the President of the United States. How do they do this? You are not going to believe it.

First they have two innocent-looking assassins traipse through the woods so they can set up an ambush. When Gallagher’s group pulls them up short some phony German police come just in time to rescue them. Then the assassins are forced into a gunfight with trained soldiers, taking one casualty.

And how do the conspirators propose to get their guy into the country? They smuggle him in disguised as a soldier being prosecuted for assault and battery, the reasoning being this is how you get somebody without a passport into the country. No, not really. They way they do it requires smuggling two people into the country. One is the assassin, and the other is the real Henke.

Who do they choose to take the package? None other than the very person who has the wherewithal to put the kibosh on the entire operation. Once in the country it is necessary to stage a jail break to get their package into business. This focuses attention onto an operation most would like to be kept secret.

Now the conspirators need to go around killing a bunch of other people, starting with wife Henke and Lieutenant Butler. More attention is focused on the operation.

They need the real Henke, because he is going to be the fall guy. When police raid the sniper’s nest somebody will claim to have killed the sniper, Henke. But the rifle with Henke’s fingerprints is not the murder weapon. That would be the one Boyette hopefully took with him when he escaped. And Boyette shot Henke with a pistol he took with him. It’s not likely that’s going to match any police pistol, especially since Boyette’s pistol was fitted with a silencer, and police do not fit silencers to their service weapons. Wait! Watch the movie. Henke will be found dead. Who shot him? A cop? No. The plot does not show anybody on scene to take credit for the kill. And Henke’s sniper rifle has not been recently fired.

Apparently the conspirators cooked up this whole Nazi business solely to suck Henke in and to make him the scapegoat. That is way too much activity for an operation you would like to close quietly and fade into the night.

Good performances all around. The French Connection car scene is not as scary as the original.

Denis Franz reprises his role as a tough cop four years later in NYPD Blue, where he starred for all 12 seasons.

I'm a retired engineer living in San Antonio, Texas. I have served in the Navy, raced motorcycles, taken scads of photos and am usually a nice guy. I have political and religious opinions, and these opinions tend to be driven by an excess of observed stupidity. Gross stupidity is the supposed target of many of my posts.
View all posts by John Blanton →
This entry was posted in Entertainment, Movies, Reviews and tagged Entertainment, Espionage, Genevieve Grotjan, Movies, reviews, Tommy Lee Jones. Bookmark the permalink.