Number 52 of a series

This is a German film, streaming on Amazon Prime Video. Dialog is in German (except for some Russian), so you need to read the subtitles. It’s Downfall (German Untergang) from 2004, and it’s about the last few days of the Third Reich. Details are from Wikipedia:

Those are mostly real people in the cast of characters. If some are fictional I have no way of knowing.

The film opens with the only survivor to participate in the production. She is Gertrude (Traudl) Junge, Adolf Hitler’s secretary during his final 2-½ years. She tells of her involvement in the final days. The interview preceded the film’s production. She died in 2002. Her maiden name was Humps, but she married Waffen-SS officer Hans Hermann Junge while working for Hitler. Hermann Junge was killed in action in France in 1944.

It’s December 1942, and Traudl interviews for the job as Hitler’s secretary. She gets the job. The most despised man of the 20th century is shown at the time as being gentle and caring to those about him. But not to his fellow Nazi’s and military leaders, some of whom received precipitous death sentences.

The video shows some of the cast.

It is now 2-½ years later, and things are much changed. The German 6th Army has been obliterated at Stalingrad, Erwin Rommel has been defeated in North Africa with the loss of the large part of another German army. Western Allies (United States, Great Britain, France) have invaded France and have pushed into Germany, crossing the Rhine the month before. Soviet forces to the north, east, and south are withing artillery range of Berlin. It is Adolf Hitler’s last birthday, and he is spending his final days in a bunker beneath the Reich Chancellery.

Chaos reigns. Shells are falling. Soviet troops are advancing. The army is ordered to make a final stand in Berlin. Hitler continues to entertain delusions of a miracle, a victory.

By now Hitler is completely deranged. He is on the phone, angered the Luftwaffe is not protecting the city. He urges the Luftwaffe leadership be hanged.

This film runs 255 minutes, and a lot goes on in these final days. I won’t show the rest, but these parts are critical.

A principal character is Reichsminister for Propaganda and Public Enlightenment Dr. Joseph Goebbels. He was an ardent Nazi and one of Hitler’s most loyal followers. The same went for Frau Magda Goebbels. As Hitler and his new bride Eva prepare to end their lives she comes to his door and falls to her knees begging him to keep on fighting.

Traudl Junge recalled this scene when she interviewed for the British TV series World at War. The youngest six of the Goebbels children are in the bunker when Hitler’s final shot rings out from inside his bedroom. She recalled it then as the boy saying, “That’s a bull eye… bull’s eye,” correcting her English rendition. In the movie the boy simply says “Gotcha.” He thought it was an artillery shell landing close by. 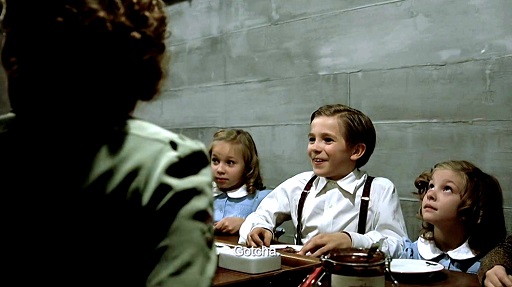 We see Frau Goebbels bring a doctor into the bunk room where here six children were staying. She and the doctor administered sleeping potions to each, forcing one who was reluctant to swallow. Later she returns to her sleeping children and places a poison capsule into each of their mouths, forcing their teeth to close upon and break them. We see the children die quickly in their sleep.

The children are carried out of the bunker, and Joseph and Joseph and Magda come outside, where each take a poison capsule while a guard shoots them in the head.

Magda had a son from a previous marriage. He was in the military, and he survived the war.

The Soviets capture the city, but Traudl dons a uniform and walks through Soviet lines with a young boy to heighten her disguise. The boy finds a bicycle, and they leave Berlin, heading for the American forces at the Elbe River nearby. 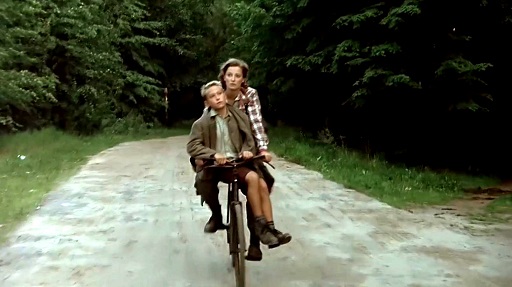 Traudl was unable to reach the American lines, and she returned to Berlin and was taken prisoner by the Soviets. She was eventually freed in 1946, and stayed to live in West Germany.

I'm a retired engineer living in San Antonio, Texas. I have served in the Navy, raced motorcycles, taken scads of photos and am usually a nice guy. I have political and religious opinions, and these opinions tend to be driven by an excess of observed stupidity. Gross stupidity is the supposed target of many of my posts.
View all posts by John Blanton →
This entry was posted in Entertainment, Movies and tagged Adolf Hitler, Entertainment, Germany, history, Movies, reviews, Traudl Junge, war. Bookmark the permalink.