Bad Movie of the Week

Number 43 of a series

Sometimes you can read the title and figure this is going to be a bad movie. Amazon Prime Video again. From 1958 this is She Demons, featuring actors you never heard of. Details are from Wikipedia.

Forget about the story line. I will give you an overview of the plot and let you decide whether you want to watch it.

The opening scene is news video of a hurricane. The announcer concludes with the announcement that a boat has gone missing with a wealthy heiress and the crew.

And here they are. Cast up on an uncharted island. By now you are getting that reality doesn’t figure in. This is the Caribbean or the western Atlantic, and there are still uncharted islands. Jerrie Turner finds all this most inconvenient, and we can see she is a spoiled playgirl.

But things go from bad to worse. Sammy gets the radio working, but it will only receive. And what it receives is that another boat has been found, and everybody thinks they were lost somewhere else. Nobody will come looking here.

More bad news. Sammy hears radio communications among members of a flight of fighter/bombers which zooms overhead. They will commence soon to use the island for target practice. Wait! This is an island nobody knows about, but the armed forces know about it?

More bad news. There are footprints in the sand. Human female prints, but with claws.  Not looking good. Bert, who seems to be from the region, recognizes evil, and he performs a ritual to mitigate the evil. 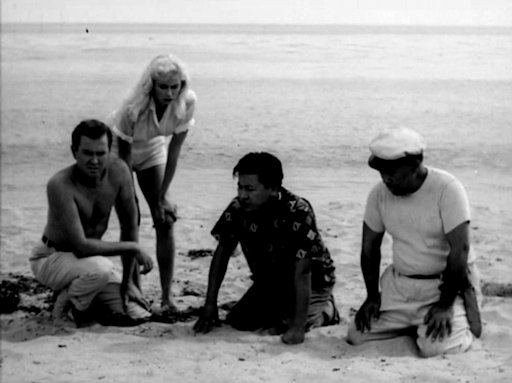 Of course they set off to explore the jungle. They leave Bert to watch the camp on the beach, and they slog through dense forest. Nothing happens during this time, except Jerrie is menaced by a large snake. And they hear drums. 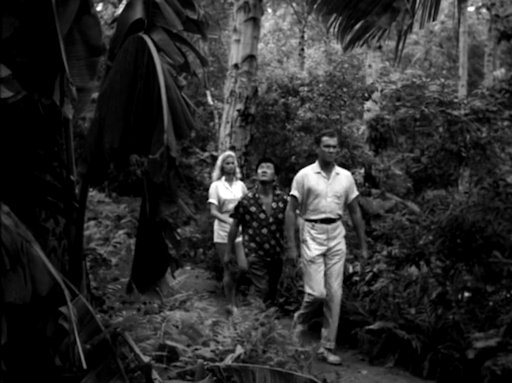 When they return to the camp Burt has been murdered, pierced by spears. On the beach they find a woman’s body. When they turn it over they see this.

The three survivors probe deeper into the jungle, following the sound of the drums. They come upon a group of beautiful women performing an exotic dance routine.

This is the point in the movie where the Nazis show up. Oh, great! All this movie needs now is a biker gang to make it complete. The Nazis lead the dancers away. Obviously they are in charge of everything that goes on.

The three adventurers follow and come to the Nazi camp, where they witness a Nazi torture master punishing one of the women with a whip. After he departs Fred cuts her bindings, but she is dead.

The torture master returns and finds the dead woman free from her bonds, and he figures there are strangers loose on the island.

By now the three have penetrated into the heart of the Nazi hideout, and they explore a strange laboratory. The torture master returns, and he captures Jerrie. Fred takes him on, and there is a fitful fight. The three escape.

The TM catches up with them out by the women’s cage, and this time he is shoved into the cage, where the women take their revenge on him.

But they are captured again. Colonel Karl Osler is in charge of the Nazi enclave. These are war criminals who have escaped after the defeat of 1945 and have been hiding out on this island. Yes, the island nobody knows anything about. He has been doing hideous experiments on the captured women dancers in an attempt to renew his wife’s face, ruined in an accident years before.

Now he has Jerrie, and his lech turns in her direction. He dresses her in one of his wife’s outfits, and romances her with offers of champagne. She rebuffs him. 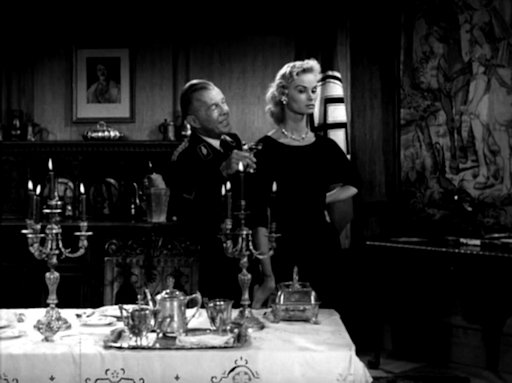 So now Jerrie must submit to Osler’s evil experiment while Fred and Sammy look on from their barred enclosure. The wife, Mona, watches through her face bandages. She knows her husband had previously put the move on Jerrie. Her loyalties have been bent by this.

The bombing starts. The lab is wrecked, and the three adventurers, along with Mona, escape. Mona has a pistol, and she shoots a Nazi guard who menaces them. She remains to die with her husband.

The bombing has triggered the volcano on the island, and the place starts to come apart at the seams. Besides that, the remaining Nazis engage Fred in a shootout. Fred kills two of them with the Nazi pistol Mona gave him, and a rock slide finishes off the remaining Nazi. 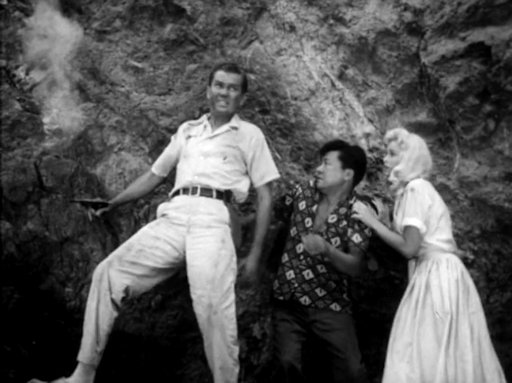 They come to the top of a ridge and look down at the beach where Mona told them there would be a boat. Fred and Jerrie have formed a romantic attachment, and they look forward to making babies.

The paddle off the island, confident the erupting volcano will bring a fleet of ships to rescue them. I mean, what else can go wrong?

As you may have guessed. I found this one also on YouTube.

I'm a retired engineer living in San Antonio, Texas. I have served in the Navy, raced motorcycles, taken scads of photos and am usually a nice guy. I have political and religious opinions, and these opinions tend to be driven by an excess of observed stupidity. Gross stupidity is the supposed target of many of my posts.
View all posts by John Blanton →
This entry was posted in Entertainment, Movies, Reviews and tagged Entertainment, Movies, reviews. Bookmark the permalink.

1 Response to Bad Movie of the Week